Back To Talonvest News Page

The self-storage building boom appears to have reached an impressive financial milestone.

Talonvest Capital Inc., the California self-storage financial adviser and mortgage broker, reports that lenders are now offering extremely attractive bridge loan deals to developers who want to get out of their original construction loans earlier than anticipated.

Traditionally, bridge loans have loan-to-cost ratios of about 75 percent to 80 percent, meaning lenders will let developers borrow up to that percentage amount of the total cost of constructing and opening new self-storage facilities. Bridge loans are typically temporary financial tools that developers use until they can negotiate permanent post-construction loans.

With a record level of new deliveries coming to market, some merchant builders are left operating facilities longer than expected while they market their facility.

100 percent loan-to-cost
But Jim Davies and Tom Sherlock, principals at Talonvest, say the loan-to-cost ratios of bridge loans have been steadily creeping up over the past three months or so due to the strong economy and growing confidence in the self-storage market as a safe investment for lenders. And recently the loan-to-cost ratio hit 100 percent on at least one deal in the Midwest – and similar deals could be on the way, the Talonvest duo say. “There’s been a real shift in the bridge-loan market,” said Davies, whose firm brokered the recent 100-percent bridge loan deal. “Lenders are getting much more aggressive.”

Bridging the gap
Bridge loans are appealing to developers for a number of reasons. Unlike original construction loans, bridge packages are no-recourse loans that don’t include personal-guarantee clauses for developers on loan repayments.Additionally, bridge loans allow developers to more quickly pull out their own equity from projects, freeing up money to pursue other development deals. “Many borrowers want these bridge loans so they can pursue other investment opportunities,” said Sherlock.

Many types of investors are now offering bridge loans to self- storage developers – global investment firms, debt fund companies and even some private equity firms – reflecting the growing popularity of the self-storage industry among investors, Davies said.

In pursuit of new deals 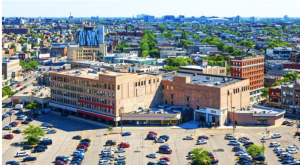 John S. Mengel, president of JSM Venture Inc., an Illinois-based self-storage owner and developer, said his firm recently worked with Talonvest Capital to secure a $25.25 million bridge loan (with a “near 100 percent” cost ratio) for a newly constructed self- storage facility in Chicago’s Wicker Park. It was his firm’s first bridge loan – and it may not be its last. “It’s all a new world for me,” Mengel said of bridge loans. “It was an exciting and interesting process.” He agreed with Talonvest’s Davies and Sherlock that a big plus of bridge loans is that it allows firms to pull some, or all, of their equity cash out of construction projects, freeing up money to pursue other deals.

“Recycling of equity is key,” said Mengel, who runs his firm with his son, Charlie Mengel. “Most people don’t have limitless equity to (construct new facilities) whenever they want. This frees you up.”

Mengel, Davies and Sherlock agree that high loan-to-cost bridge loans aren’t for everyone. When it comes to such loans, bridge lenders tend to like deals of $10 million or more – and with experienced developers building new facilities in prime locations. In the case of JSM’s bridge loan, Mengel said his new 111,000- square-foot facility, located in a shopping center, is in a “high barrier, A-plus” submarket of Chicago, making it very attractive to bridge lenders. “The location really fueled our bridge loan,” he said.

Patiently waiting for stabilization
Bob Baker, president of Clark Investment Group in Wichita, Kansas, said his firm also has never taken out a bridge loan before. But now he’s seeking a bridge package, via Talonvest, for some properties in New York. Normally, he said his firm would go directly from a construction loan to a permanent loan – with no temporary bridge loan in between. But it takes longer these days for newly opened storage facilities to get to a lease level, or a
“stabilization” level, that is acceptable to permanent-loan lenders, he said. More self-storage facilities are being built these days, increasing the competition for customers and lengthening the time it takes to fill up recently constructed buildings, he said. Thus, bridge loans are appealing, Baker said. With a bridge loan, his firm can be a little more patient when it comes to leasing up new facilities.

Talonvest Capital’s Davies said 100-percent bridge loans have been reached in the past, during previous business cycles. But the recent Midwest deal that included a 100-percent bridge loan was the first he’s seen in this current business cycle. Davies said that some lenders are now willing to offer up to 100 percent loan-to-cost for new builds “because the loan to stabilized value is still in the 65 percent range.”

Each month, Talonvest shares updates on current trends in the perm, bridge, and construction lending market based on our
real deal experiences and discussions with banks, life companies, and CMBS lenders…don’t miss out on this valuable news.